GET A FREE COPY OF ROSETTA'S BOOK UNTIL NOVEMBER 23 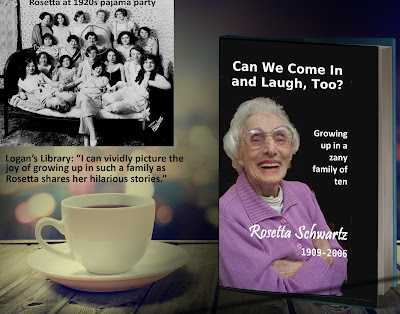 From the time my brother Meyer was in his late teens all the way to his early twenties, his only desire was to be was an actor. We were living on Ogden Avenue at that time and there was a huge mirror built into the living room wall that went all the way from the floor to the ceiling.
Meyer bought a makeup kit and every day he stood in front of that big mirror trying out a different kind of makeup and practicing lines. One of my vivid childhood memories is that I never knew what my brother would look like, because he tried so many different faces. When he thought he had mastered makeup and acting, he went from studio to studio asking to show them what he could do, but he never got a part. After a while he realized that it wasn’t so easy to put an act together and he gave up on it. He did get into show business, though, but in a different way. He also played the cornet, and before going into sales full time, he got a job playing with John Phillips Souza’s band for a short time. That didn’t last more than a year or so. He had finally gotten the urge to be a professional performer out of his blood and became a salesman. Like most of my brothers, Meyer had a gift of gab and it served him well when he connected with the Sessions Clock Company.
at 2:45 PM 1 comment:

5 DAYS UNTIL THE FREE PROMOTION FOR "CAN WE COME IN AND LAUGH, TOO?" 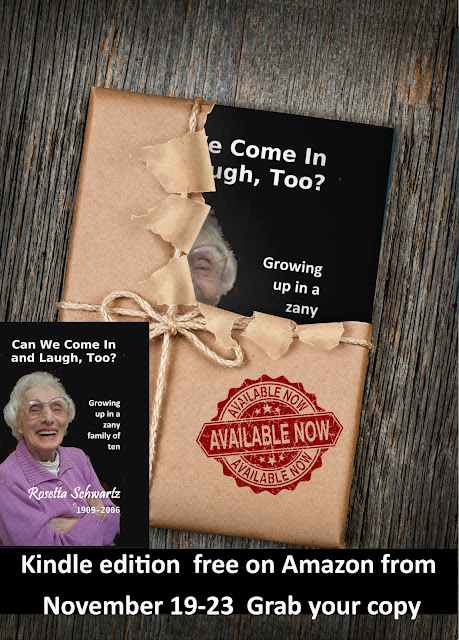 A BIRTHDAY GIFT TO READERS


Rosetta was born on November 18, 1909 in Chicago, Illinois. In 2006 she passed away at the ripe old age of nearly 97 years old, but her stories and humor live on in her memoir "Can We Come in and Laugh, Too?"


To celebrate her birthday, from Thursday, NOVEMBER 19 through NOVEMBER 23 you can DOWNLOAD A FREE KINDLE COPY of her book and enjoy her memories of growing up as the youngest of ten children in a zany Latvian immigrant family in the early 1900s. What they didn't have in money, they made up for in humor. She recalls how neighbors would knock at their door and ask, "Can we come in and laugh, too?" 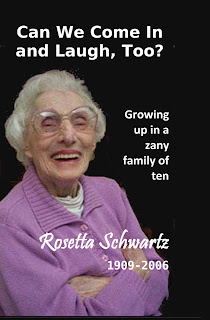 Rosetta takes you all the way up to 1989 when she wrote this memoir at the age of 80. The manuscript was found and published in 2012. She always used humor to get through even the toughest curves that life threw her, like the day her husband dropped dead at the young age of 49 and left her with two children and little money. Always a positive person, this book is not only funny but inspirational. The poignant parts could almost be called a lesson on how to combat disaster with humor.

Available on Amazon in Kindle and paperback editions. A wonderful holiday gift for those who love nostalgia and
uplifting stories.
at 9:45 AM No comments:

TIMES, THEY ARE "A-CHANGIN'" 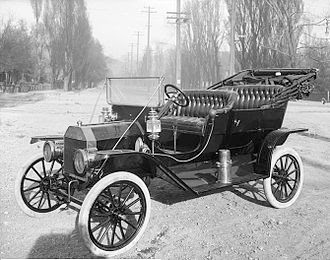 Cars are such a great illustration of how things changed from the time Rosetta was born to the present. She wasn't quite one year old when this slick 1910 Ford Model T burst onto the scene. Going for a little spin in the convertible? Be sure to wear a duster and hat. 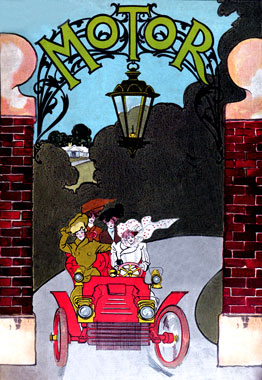 The Model T was designed by Childe Harold Wills, and Hungarian immigrants Joseph A. Galamb and Eugene Farkas. Henry Love, C. J. Smith, Gus Degner and Peter E. Martin were also part of the team. Production of the Model T began in the third quarter of 1908. Collectors today sometimes classify Model Ts by build years and refer to these as "model years", thus labeling the first Model Ts as 1909 models, the year Rosetta was born.

With ten children and low income, her immigrant family couldn't afford one of these new-fangled contraptions. There is certainly no connection, but during her long life Rosetta never learned to drive. She traveled around Chicago, and later Los Angeles, using public transportation. She was a whiz with bus schedules and could find a route to most any destination, even if it took about 30 minutes by car and 2 hours or more by bus.

Fast forward to 2006, the year Rosetta passed away nearing her 97th birthday. Ford's concept car that year would have amazed her. It was the Refl3x, a technological showcase that included solar panel-powered headlights, integrated child seat, baby cam with a monitor mounted on the dash, inflatable rear safety belts, and an interior quieted by ground rubber taken from Nike athletic shoe outsoles.  It also featured an advanced diesel-electric hybrid engine with new-generation lithium ion batteries that help deliver up to 65 miles per US gallon. A production version of the Reflex design was not announced. It makes one wonder what happened to these great ideas since we are still oil and energy dependent upon other nations.


So, look at the contrasts between these vehicles. What a difference 102 years makes!

"Can We Come in and Laugh, Too?" takes you back to Rosetta's era with wonderful descriptions of being born in the early 1900's,  going through the Flapper era, World War I and II, all the way up to the late 80s. She grew up in a zany family, so laugh along with some of her funny stories.

The Great January Comet of 1910, formally designated C/1910 A1 and often referred to as the Daylight Comet[ appeared in January 1910. It was already visible to the naked eye when it was first noticed, and many people independently "discovered" the comet. At its brightest, it outshone the planet Venus, and was possibly the brightest comet of the 20th century.


The comet brightened rather suddenly, and was initially visible from the southern hemisphere only. A number of individuals claimed "discovery", but the comet is thought to have been first spotted by diamond miners in the Transvaal before dawn on January 12, 1910, by which time it was already a prominent naked-eye object of apparent magnitude −1.
The first person to study the comet properly was Scottish astronomer Robert T. A. Innes at the Transvaal Observatory in Johannesburg on January 17, after having been alerted two days earlier by the editor of a Johannesburg newspaper.
The comet reached perihelion (the point in the orbit of a planet, asteroid or comet where[& when] it is nearest to the sun. on January 17 and was at that time visible in daylight with the unaided eye; following perihelion, it declined in brightness but became a spectacular sight from the northern hemisphere in the evening twilight, its noticeably curved tail reaching up to 50 degrees by early February.
at 9:48 AM No comments:

Manhattan Bridge opened to traffic December 31, 1909. Rosetta was about a month-and-a-half old.

Historic Milestones
Rosetta was not quite a month and a half old on Dcember 31, 1909, the day the Manhattan Bridge. a suspension bridge that crosses the East River in New York City, connecting Lower Manhattan at Canal Street with Brooklyn at the Flatbush Avenue Extension officially opened.

At 2:00 pm, the 6,855-foot-long (2,089 m) Manhattan Bridge was opened to traffic, after eight years and 26 million dollars had been spent on its construction. New York City Mayor George Brinton McClellan, Jr., who was on the last day of his term of office, rode in the first automobile of a motorcade from Manhattan to Brooklyn.

The Manhattan Bridge was the last of the three suspension bridges built across the lower East River, following the Brooklyn and the Williamsburg bridges. It has four vehicle lanes on the upper level, split between two roadways. The lower level has three lanes, four subway tracks, a walkway and a bikeway. The upper level, originally used for streetcars, has two lanes in each direction, and the lower level is one-way and has three lanes in peak direction. The bridge once carried New York State Route 27 and later was planned to carry Interstate 478.
at 5:29 PM No comments:

Rosetta's parents were immigrants from Friedrichstadt  a town in Latvia on the left bank of the Daugava River about 80 km southeast of Riga. So it is interesting to me that the Republic of Latvia was proclaimed on November 18,1918, Rosetta's 9th birthday, and that date became a key date in history. Finally after long years of oppression Latvians took the steps to proclaim their country. Every year there is a military parade in Riga and other celebrations.

The revolution in 1905 was the first sign of Latvian national awaking and the thought of breaking from Russia. Although the main force in the revolution was Latvian social democrats, the whole revolution was made against foreign oppression. The attacks on German mansions and calls for Latvian autonomy had national character. The next crucial point was the First World War.

In 1915, the German army invaded Latvian territory. 567 000 people fled Latvia to Russia. Had Matilda and Eli Schwartz not immigrated to the United States in the late 1800's, before starting a family, they might have been among those refugees. It was a catastrophic situation when half of Latvian population left their homeland. Nationally minded refugees organized self-support committees in all Russia. Only Jewish refugees were more organized than Latvians. The German army stopped near Riga and stayed there until 1917. To fight Germans Latvians organized national rifleman regiments. Latvians gathered under the Russian banner to protect their land. This was a birth of the Latvian national military.

Rosetta was 6 years old the year the German army invaded the area where her parents lived in Latvia. By then the Schwartz's were secure in their home in Chicago. It is unknown whether close relatives had remained in Latvia and were part of the mass exodus, or worse yet, were murdered. Rosetta was the youngest of their ten children, and while the family didn't have much money, and  they did have two priceless things. LAUGHTER AND FREEDOM

CAN WE COME IN AND LAUGH, TOO?

EXCERPTS FROM CAN WE COME IN AND LAUGH, TOO? CLICK TO MAKE LARGER

Enlarge this document in a new window

Now available in Kindle and Paperback

Born in 1909, Rosetta was the youngest of ten children in a zany immigrant family. She talks about growing up in the early 1900s when cars were still being developed, very few people had telephones or radios and getting an education beyond grammar school was a privilege for children in families of modest means.

Laughter was Rosetta's companion throughout her long llife--nearly 97 years, and she had the ability to inspire others to achieve beyond what they thought possible.

Her handwritten memoir was turned into "Can We Come In and Laugh, Too?", now available in paperback and digital editions. So grab a comfortable chair and share a bit of laughter with her.